New Year’s is bound to introduce you to a number of Japanese customs and events that are seen only in this fabulous country. Not only do you have the first shrine visit of the New Year, called Hatsumode (初詣), there is even a special kind of traditional food called osechi-ryori (お節料理) that the Japanese eat to celebrate the holiday that are oftentimes so beautiful, you could call osechi edible art.

Long before the Japanese started gathering around the kotatsu and stirring the nabe pot over the IH heater while snacking on mochi, osechi ryori was enjoyed by those of the Heian era (from 794 to 1185).

New Year’s Day celebrations are not purely from Japan. Originally, it was one of the five seasonal festivals that the Imperial Court in Kyoto decided to hold onto to after New Year’s was introduced to the Japanese by the Chinese. During the Heian period, it was considered taboo to use the hearth to cook food during the first three days of the New Year. This meant that osechi was made during the closing of the previous year.

In the earliest days of osechi ryori, the mainstay was nimono, or vegetables that have been boiled in soy sauce, sugar or mirin. Throughout the years, the foods included in osechi have increased dramatically. Now, osechi can be used to refer to any food that has been prepared for the sake of New Year’s Day, and some even includes Westernized osechi (西洋お節) or Chinese osechi (中華お節). Traditional dishes are served in elegantly crafted bento boxes called “jubako” and come paired with a soup known as “ozoni.”

Each tier of the jubako features a specific kind of osechi, and the amount depends on how many tiers the jubako has. Typically, there are 3 to 5 layers. The top box includes many celebratory dishes called shugi sakana (祝儀肴) made to eat alongside drinking sake. Next includes vinegared dishes, called sunomono (酢の物), and the third tier is yakimono (焼き物). The fourth will have nimono (煮物). Lastly, the bottom, final layer may have leftovers that didn’t fit in the other layers.

The following list has some of the favorite osechi ryori dishes that you can taste during your Japanese New Year’s celebration on January 1st. Some of the dishes also symbolize wishes of good health, while many are not considered traditional and so are included solely out of deliciousness. Nothing wrong with that, right?

Before getting into the list of traditional osechi dishes, I wanted to touch on the ingredients that are considered essential for osechi – black beans, anchovies, and herring roe. The reason these three ingredients are so important to osechi is for the connection to the old Japanese agricultural system.

Anchovies were the cheapest form of fertilization in the past. To pray for rich fields during the New Year, dried anchovies, or tazukuri, is included in the cooking.

Black beans, or kuromame (黒豆)、are something of word play. “Mame” can mean either bean or also “to work hard.”

Herring roe, or kazunoko (数の子) in Japanese, typically have millions of eggs in a single sac. This is said to be symbolic of fertility. 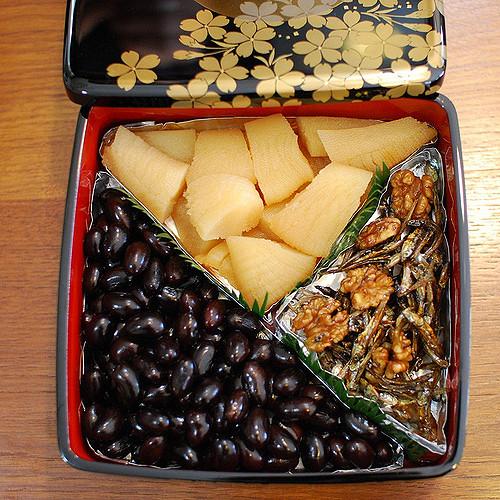 Since fertile fields and hard working farmers were pivotal to success and prosperity in old Japan, starting the year off with osechi was much like getting to the shrine as soon as possible. No one wanted to upset the gods at the beginning of the year.

Now for some traditional dishes!

1. Kuri Kinton (栗金団)
Starting the list off is a delicacy made solely for Japanese New Year called “kuri kinton,” which is a comforting dish of candied chestnuts and golden sweet potato that are mashed together, blended with syrup, then stuffed into dumpling dough. The golden yellow color of the finished product is a wish for prosperity.

2. Kazunoko (数の子)
As mentioned earlier, kazunoko is seasoned herring roe. The caviar gets steeped in light dashi broth made from bonito flakes and kelp.

3. Konbumaki (昆布巻き)
Large pieces of konbu seaweed get simmered then tied into pretty bows. Sometimes a piece of dried daikon is tied around the konbu. Alternatively, konbu kelp can be wrapped around fish, chicken, or pork.

The symbolism is in the word “konbu,” which also means “joy.”

4. Sunomono (酢の物) [also called Namasu (なます)]
Though sunomono salad can be eaten throughout the year, the osechi ryori version has raw carrot and a white turnip called kabu. The dish has many variations that depend on the region, but the most common ingredient would be the vinegar used.

5. Onishime (お煮しめ) [also called Nimono (煮物)]
Yes, nimono is served throughout the year (and happens to be one of my favorite things to eat), but it is an integral part of the osechi jubako. The vegetables that are usually included are shiitake mushrooms, burdock root, taro root, konjack (konnyaku), carrots, snow peas, and lotus root.

The many holes in the lotus root supposedly mean a clear vision to the future.

6. Datemaki (伊達巻)
These sweet rolled omelettes are mixed with either fish paste or mashed shrimp. The name supposedly comes from auspicious days, called hare-no-hi, when people wear fine clothing and enjoy themselves. The other meaning is a hint to the samurai of the Date clan, who were rather fashionable. 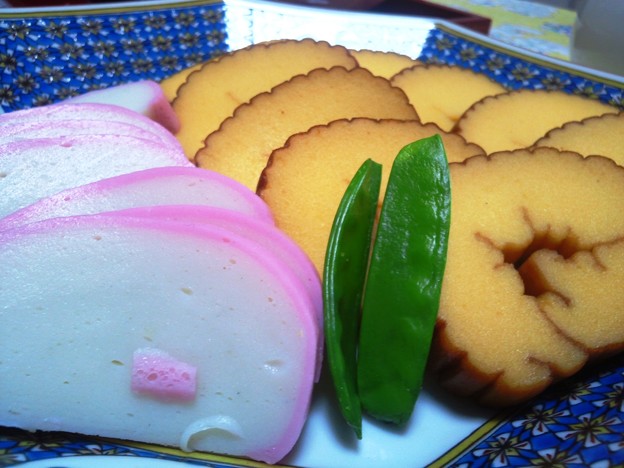 Datemaki and Kamaboko (below) as part of an osechi set. Image source: Flickr.

7. Kamaboko (蒲鉾)
Slices of red and white kamaboko, or broiled fish cake, are usually alternated or arranged into a pretty pattern in the jubako. The color is a symbol of the Japanese rising sun and lends a festive feeling to the meal’s overall design.

8. Kinpira Gobo (きんぴらごぼう)
Kinpira Gobo is not just limited to osechi ryori. It is considered something of a staple, an “okazu” that is included with Japanese food as a side dish. This dish is made of julienned carrots and burdock root that is then sauteed in soy sauce, mirin, and sugar. For osechi, the recipe is sometimes switched to include oil or braising in dashi broth for a lighter meal.

9. Ozoni (お雑煮)
This traditional soup comes with a single piece of mochi (rice cake). There are various styles of ozoni that depend on where you are in Japan. Some soups have clear dashi broth while others are made with miso (fermented soybean paste). 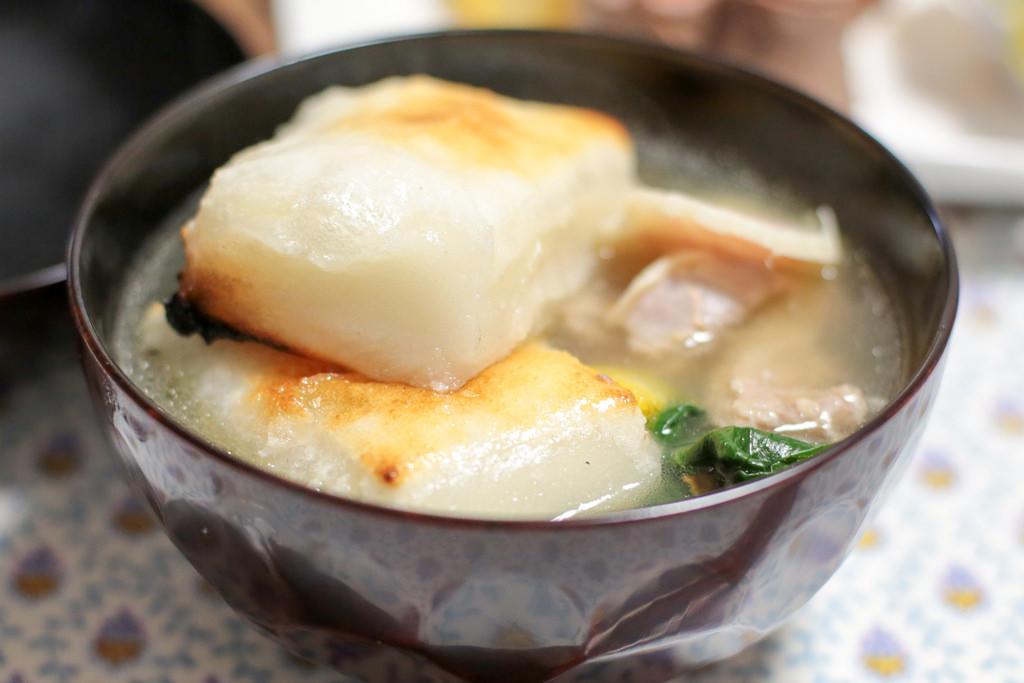 10. Zenzai (ぜんざい)
Zenzai is a hot dessert soup that comes from red adzuki beans. Oftentimes, zenzai is topped with toasted rice cakes (mochi) or even mini shiratama dango. Though it is not thought of as a traditional osechi dish, zenzai is always a nice treat to finish off your osechi dinner.

11. Ebi (海老)
The shrimp you see in osechi boxes are usually long and slightly bent over, like an old person leaning on a crutch. Because of this, these shrimp (ebi) are symbols of long life.

12. Nishiki Tamago (錦卵)
This is a Japanese take on egg roulade. The egg is separated prior to cooking. The yellow means gold, and the whites are silver. Together, the two mean wealth and good fortune for the New Year.

13. Daidai (橙)
Japanese bitter orange is often included due to the name. “Daidai” can also be written as 代々, which means “from generation to generation.” In other words, it is a wish for children in the New Year.

Where to Buy Your Osechi

There are some households that still enjoy homemade osechi, but many people nowadays will pre-order osechi boxes from department stores like Isetan, Takashimaya, and Odakyu. This means that you won’t be finding discounted osechi in convenience stores on the day of, and even if you do, these beautiful spreads of Japanese food do not come cheap. And if you do find cheap osechi, you may just want to question the quality of it and how well it will taste. The average starting price of a 3-tiered osechi ryori set is oftentimes 10,000 yen and above.

Below is an example of a convenience store or department store osechi set from previous years: 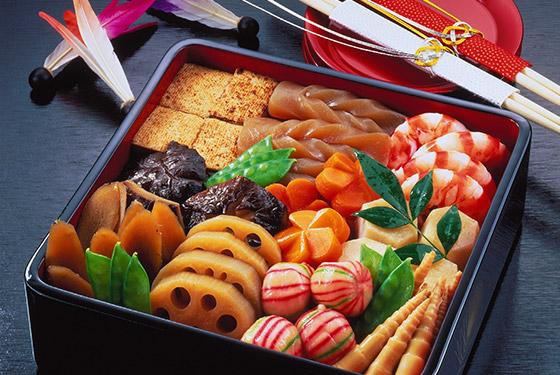 Osechi ryori is a special meal that happens on the first day of the Japanese New Year. Many of the foods included have a symbolic meaning for prosperity, wealth, and happiness in the New Year. However, while the tradition has been upheld since the Heian period, many people no longer handmake their osechi. Department stores supply the boxes, just as they do Christmas cakes and much more! Be sure to try osechi when you have the chance, because it is a healthy and delicious way to start the New Year off right. 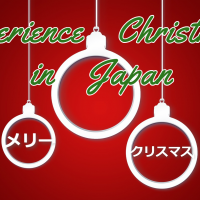 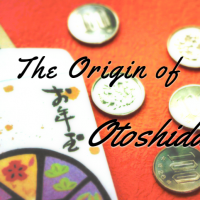