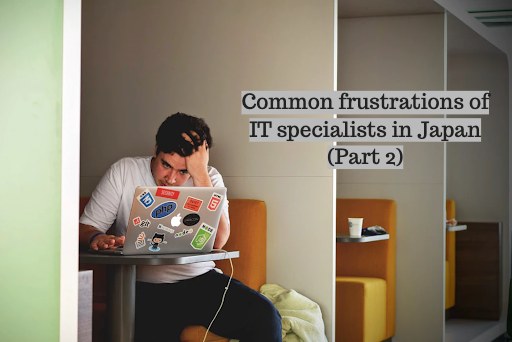 Common frustrations of IT specialists in Japan (Part 2)

Being an IT specialist is a fulfilling and fun trade, but there are times when it can get a little frustrating. And there are cultural and work culture differences that can add to the difficulty of dealing with them.

What are the most common frustrations working as an IT specialist in Japan? And how do you go on about solving them?

Many Japanese job listings don’t require the specialist to speak (much) Japanese. Perhaps you are even considering a job offer like that right now. Or maybe you are already working at a company that did not require Japanese when the job got advertised.

Every time the schedule gets tight, or the workplace gets otherwise busy, colleagues float your mailbox with walls of Japanese text. It happens with group mails a lot.

It is likely because you are the only or one of the few non-Japanese speakers in the office, and your workmates deem it more efficient to do mass emails and notes in Japanese and then follow up with an explanation. Or they believe you are capable of understanding or translating the mail yourself.

If you can, do just that. Use it as an opportunity to learn the language. Being able to speak Japanese will only make your time in Japan more enjoyable.

If you can’t manage or feel that it gets in the way of your work, consult with your superiors. That is what they are there for. But do it in a non-demanding manner. Rather than saying ‘Japanese was not in the contract’, say something like ‘I’m worried I might miss something because I don’t understand Japanese’.

Maybe you speak a little Japanese, enough to get by and talk to your co-workers. But then you are asked to explain the complications of a project to people (usually higher-ups) who don’t have a tech background. And you are given a cartload of Japanese, sometimes even Kanji, to use instead of established industry terms. And like the grand grand grand grandchild of Dr Frankenstein, you give it a go. And instead of saying cloud computing or クラウドコンピューティング you are forced to use 靄計算(haze calculation).

Now the same thing can happen to you in reverse. A client or a co-worker could ask you to do something or ask you about something, and it might be a laboured translation of a common term. If possible, get the person to show you, instead of wasting valuable minutes looking up 電網 only to realize they mean the internet.

There is no definite cure for this. The best you can do is get used to it and memorize the most frequent terms so that when they do get referred to, you know what they mean instead of wasting time searching the dictionary.

Most expats find it a little tricky to get used to the way Japanese companies manage risk. It is through supervision and repeated cross-checks. IT-related jobs are no exception. It is especially so with positions at companies not in the tech field.

It can be somewhat frustrating to have to stop every once in a while and report your progress. Imagine finally getting into the flow of a bothersome debugging session, and just when you are about to close in on the problem, your supervisor calls you over for a status report. And you walk back to your station with your trail of thought in shatters only to start from scratch again. Is it worth it?

Being checked upon constantly and spending a good part of the day reporting progress might seem futile, but it protects you from making mistakes. Even if you do make mistakes, you are safe. Because the thought is that ‘Mistakes caught early are not mistakes’. And if the mishap is beyond repair, it is the responsibility of your superior more than it is yours.

All jobs come with tiny annoyances. Being an IT specialist is no different. But if you figure out how to deal with them early before they grow into actual grievances, you not only get to improve your work environment but yourself as well. 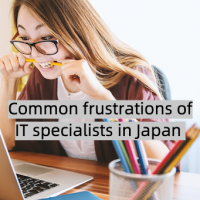 Common frustrations of IT specialists in Japan (Part 1)Prev 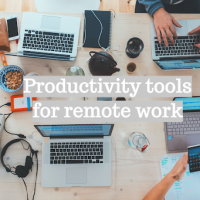