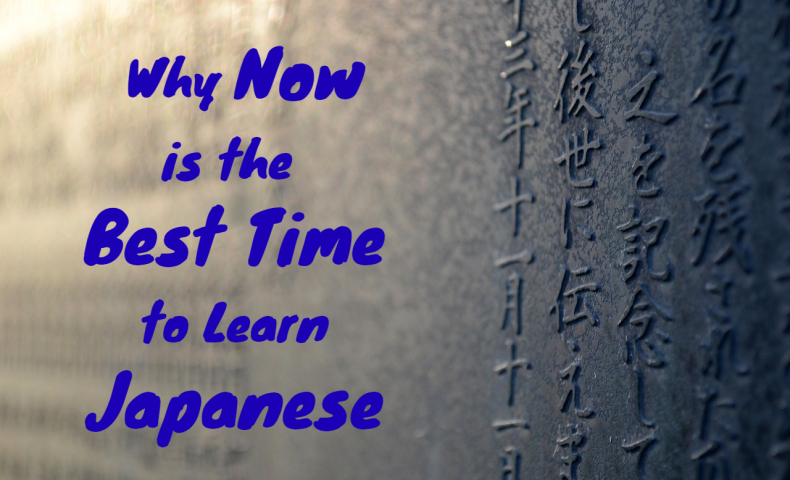 Why Now is the Best Time to Learn Japanese

Language is an amazing thing. We can express our intent and communicate our feelings without being face to face. Even the fact that you are reading this means that you are capable of learning a language.

Some people find (or think) it is difficult to learn another language. But surprisingly most of us have the capability. So if you have any inclination to try another language, why not learn Japanese? Japan is an extremely open, safe, and interesting place.

As we race towards the 2020 Olympics Tokyo is shifting, opening up its doors to more foreigners. If you are fluent and can stand out against your competition by passing the JLPTs or wowing your interviewer with Japanese, wouldn’t that mean a better chance of landing that dream job in Japan?

With Japan’s baby boomers retiring, and Japan’s population actually on the decline along with Japan’s culture of promoting from within, means that entry level and intermediate positions are opening faster than ever.

Unfortunately for most who don’t live within Japan’s borders, Japanese college graduates normally fill the beginner jobs. However there is a big need for people with three to five years of experience in their field.

If you are in the technology field and have at least three years experience, especially coding in a specific language or software, there are jobs for you within your reach. Since Japanese employees are molded by their company needs and the senior developers teach one general theme, it is difficult to find well-rounded experienced developers in country.

Check out our Jobs page for various openings in technology fields!

#2: Learning a Language Makes You Smarter

Yes, knowing another language makes you smart. But being bilingual is not just something to impress your friends or just another note on your resume. Learning languages improves other areas of the brain besides the language regions.

A psychology paper published in 2008 show that bilinguals solved mental puzzles faster than monolinguals. Bilingual infants were also able to analyze and adapt to rule changes faster than monolinguals (1). This could be due to bilinguals constantly reaching into both languages when forming sentences and speaking in either language (I know I’ve slipped up and finished English sentences with Japanese words before).

Learning languages also helps later in life. Ongoing research by TH Gollan and the University of California San Diego has shown that being a bilingual may reduce mental decline in old age and delay symptoms of Alzheimer’s disease (2).

Now you might think, “I’m too old, I’m past my learning prime,” but that is not true. The Mythbusters debunked long ago that “old dogs can learn new tricks” and any time is a good time to learn. There has been research done that proves that you can achieve near-native levels of a second language well after your “prime language learning years,” which are 0-10 (3). So why don’t you pick up Japanese? Like, now!

#3: Learning in the Digital Age

At one time, you could only learn a language from a teacher face-to-face: pre- cyber classes, FaceTime, YouTube, computers in your pocket, you get the picture. And especially if you wanted to learn some of the “exotic” languages (non-Romanic languages) you would need a university class.

Now everything is just a couple mouse-clicks away. There are podcasts like JapanesePod101 that give complete lessons. You can find many classes taught by Japanese people on YouTube. Don’t even get me started on smartphone apps… I already wrote a whole article about that.

》》Check out TalentHub’s YouTube Channel to practice Japanese for Work 《《

As of 2018, one in ten Tokyoites in their 20s are foreigners (4). Within the coming years that number will only grow. If you have ever thought of working abroad, in Tokyo, it is a great time to give it a try. Knowing how to speak Japanese will only increase your chances.

If you have the desire, Japanese is a very learn-able language. Do not let a lack of high school or college Japanese curriculum fool you, educational opportunities are widely available.

If you are one of those people who have considered moving here, or even just learning Japanese, give it a try. But first make a plan. Look through some of my other language posts for plan ideas. And please leave a comment below for any particulars.

Aloha for now. Hope to see you here soon.