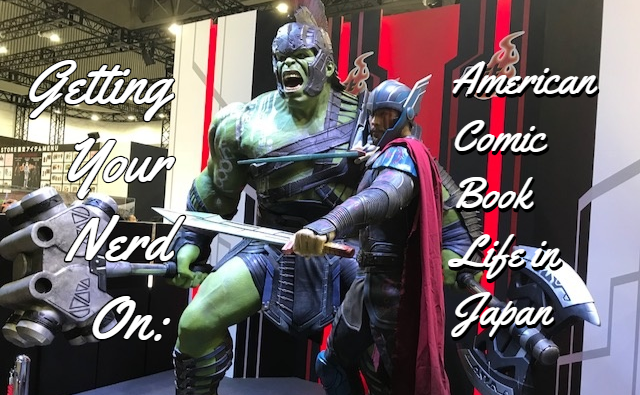 I love comic books. Reading comics is my favorite way to pass the time on the long commute to work. With superhero movies becoming mega-blockbusters, from about the time Tobey Maguire stepped into the red and blue spider suit, more people are getting into the superhero conversation, even here in Japan.

But many Japanophiles (I had to look that one up) would say, “but you’re in Japan, shouldn’t manga, the Japanese equivalent of comics, rule with an iron fist?” Well, the answer is “yes” and “no.” Yes, that is, as far as print media is concerned manga is head, shoulders, and cape above comics in sales. Manga is ingrained in the culture. The “no” part of the answer lies in everything that is non-print and highly marketable like clothing, accessories, and movies.

Hollywood movies dominate in theaters here, and comic book companies, DC and Marvel, capitalize on the frenzy with selling not only limited edition merchandise, but goods targeted specifically towards Japanese. Here are some ways to enjoy your favorite web spinning, shield throwing, and heat-ray vision blasting heroes in the land of the rising sun. 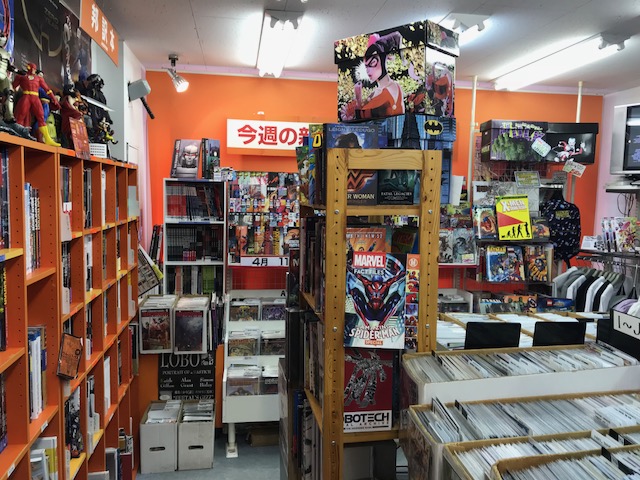 Of course we have to start with the comics themselves. Obviously living in Japan, especially in a crowded city like Tokyo, apartment space is a problem. You just can’t fit a library of comics into a 30 meter-squared apartment. Digital is your best bet. Subscription plans like the Marvel Unlimited and Comixology Unlimited are great if you have an iPad or Android tablet because you can access thousands of comics instantly. For the occasional reader digital versions of the paperback books are available through Amazon Kindle or Google books.

If you are a fan of flipping physical pages, there are various comic book outlets around Japan. A quick search will provide import stores that offer everything from single issues to omnibuses. My personal favorite is Blister Comics in Akihabara. Walking into Blister is much like walking into an American comic book store because they have everything to cover the comic book cravings with a mix of popular comics. The majority of comics are in English but they do offer Japanese translated paperback books for the higher selling series. To complete the ambiance the wall-to-wall shelves are topped with various comic character figures. 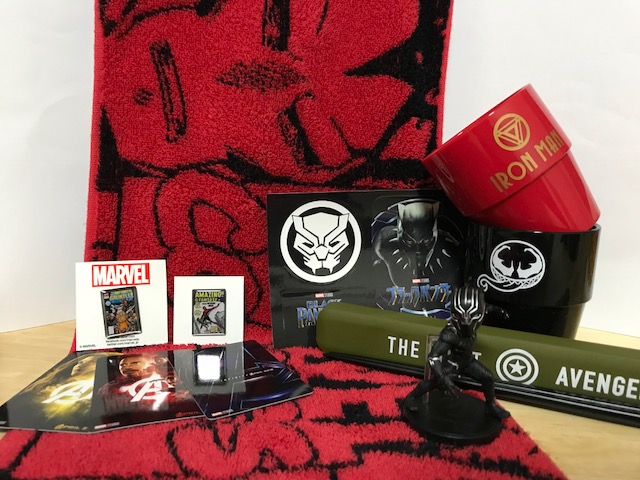 Towels, cups, chopsticks, pins, cards, and figures
are only the tip of the iceberg!

How can you be a fan, or as the Japanese say, “otaku”, without collecting collectibles? Shirts, figures, and pins are the sign of a fan. Even though Japan is a uniform type society that doesn’t mean that you can’t accessorize. Walking around Tokyo you will probably come across people with shirts and backpacks bearing the Marvel red and black logo. Also common are phone cases, character keychains, handbags and drawstring bags with the Marvel comic patterns. 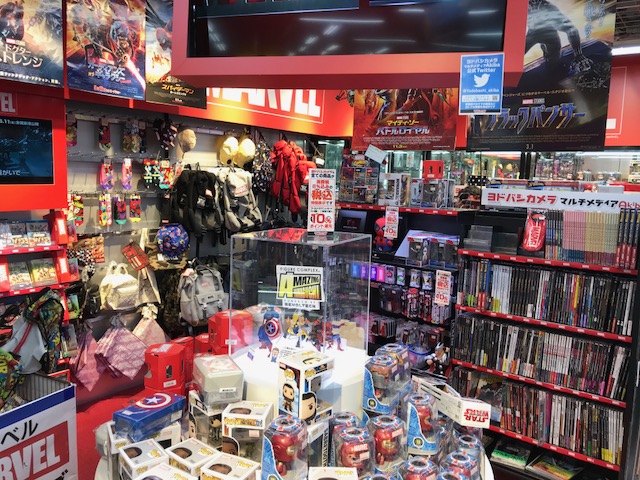 The Pre-Infinity War Marvel corner at Yodobashi Camera in Akihabara

Japan has no shortage of figures: everything from a dedicated Funko Pop figurine store in Harajuku, to Ichiban Kuji lottery figures, to arcade exclusives. There is a figure for every fan. What is interesting is that DC and Marvel allow the Japanese companies they do business with to modify the character images, making them either more anime- or doll-like, to better sell in the anime heavy market. One trip to Akihabara, and you can find any figure, model, or game you are looking for. A round of Marvel vs. Capcom anybody? How about a model Batmobile? 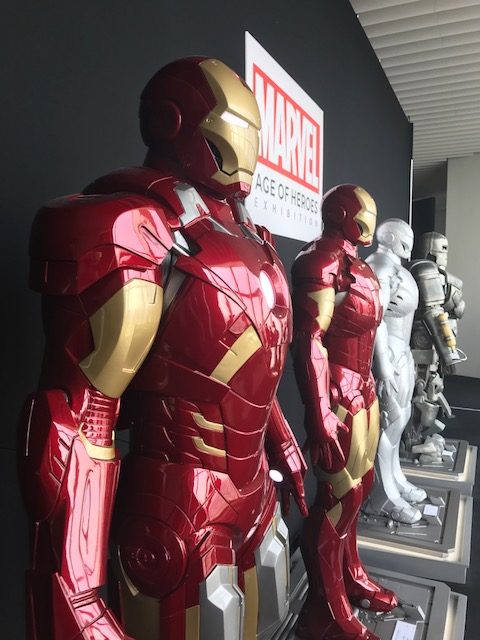 Hall of Armors at the Marvel Age of Heroes Exhibit

As fans and students of films know, one of the greatest joys is getting a look at what goes into making a film. Marvel Studios brings that excitement to Japan for not only fans of the film franchise but of the comic books too. The Marvel Age of Heroes Exhibition is a traveling exhibition that started in 2017 and has been traveling the country. The Exhibit has some costumes and props used in the movie mixed in with life-sized statues of the actors.

The Marvel Age of Heroes Exhibition also has some of the original comics and rough drafts on display so people who only have seen the movies can get a quick summary of the comic book characters’ origins. As an old school DC movies fan you can only hold your breath: DC comic book characters have not gained that much traction so a “DC Exhibition: Dawn Of Super Heroes” might not make it to Japan until the DC movies gain momentum. 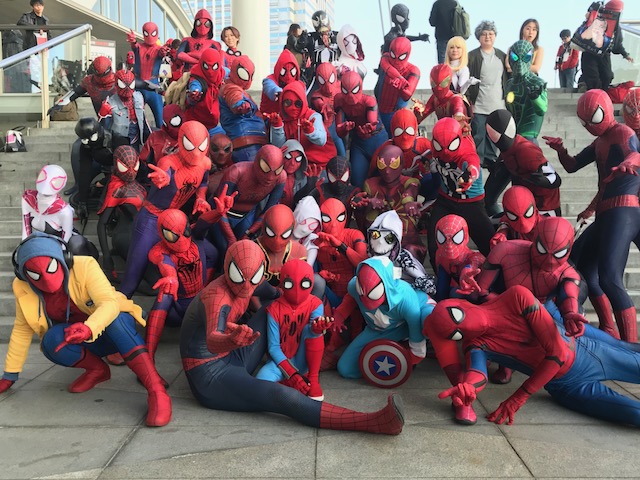 The Spider-Verse invades Chiba during the 2017 Tokyo Comic Con…
can you find me?

The Tokyo Comic Convention is a new convention. It started in 2016 when Stan Lee and Steve Wozniak looked to expand comic book conventions globally. Ever year it is held in December at the Makuhari Messe convention center in Chiba Prefecture. As it is still gaining steam, it doesn’t have the same star power as San Diego or New York Comic Cons but there are still plenty of exhibits to see, goods to buy, and artists to talk with.

The one part of the convention that the Japanese embrace and don’t skip on is the cosplay (dressing in costumes). Japan is a cosplay country and whether it is a Japanese or an American character you will find some spectacular costumes!

Showing love for American comics is new in Japan. It wasn’t until the birth of the Marvel Cinematic Universe (Iron Man in 2008), that the marketing windstorm hit Japan. Now, over 10 years in, the MCU has grown in size and movies are debuting at a decent pace. Everybody from the Tokyo Metro Train Company, Tokyo Skytree, and individual movie theaters are looking to capitalize on the success with stamp rallies, light-ups, and exclusive products. I guess it has become the Age of the Nerd, or the Age of the Otaku. 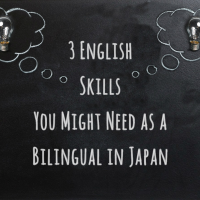 3 English Skills You Might Need as a Bilingual in JapanPrev 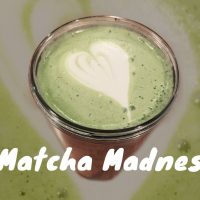