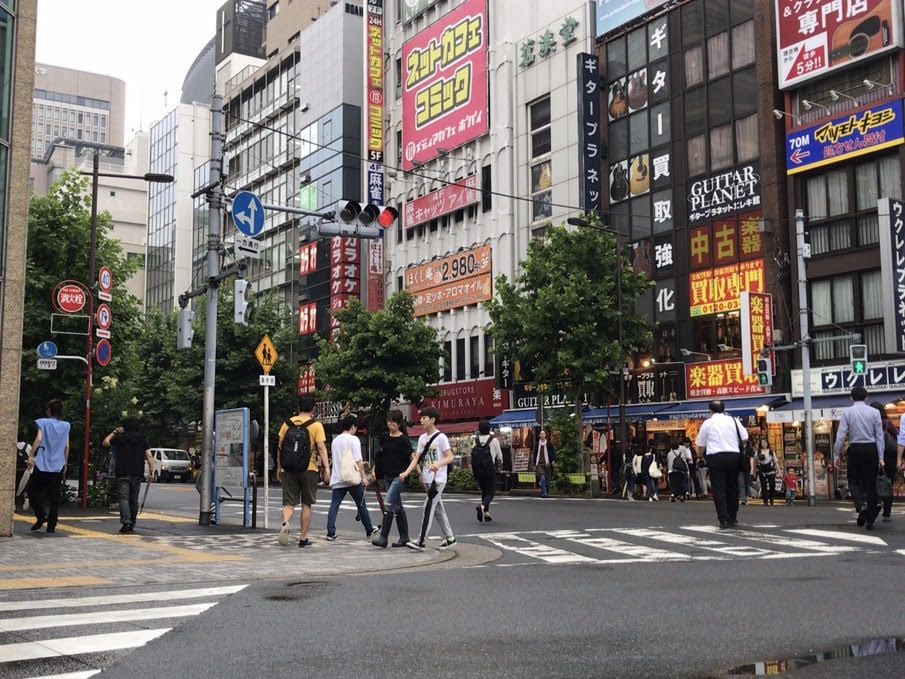 Many people in Tokyo probably don’t realize it but music is everywhere: convenient stores play popular songs for customers, street performers jam outside busy stations, and billboard trucks drive around playing music videos of the hottest hits. During commute time businessmen, with their expensive wireless ear buds in, rush to catch the train and high school students, going to-and-from school, carry guitar cases in lieu of school backpacks. So where do the locals go to buy their violins, wind instruments, and guitars? Their recording gear and score sheet? It is a place of pricey instruments and cheap eats, called Ochanomizu (御茶ノ水).

While music shops can be found near every major train station, and major electronic stores sell electric guitars and keyboards, nowhere else can you find a greater selection of new and used instruments than Ochanomizu. Ochanomizu is only four minutes, just two stops away, from Tokyo Station on the Chuo Line. Upon exiting Ochanomizu Station cross the street and you will see several blocks lined with ukuleles, trumpets, violins, and guitars. The line of stores do not continue very far but each individual shop has multiple floors lined floor-to-ceiling with every piece of equipment and instrument one could imagine. It is quite possible to spend a whole day admiring the craftsmanship and artworks adorning each store.

The most popular instrument in Japan is the guitar. Many see it as a complex, solitary, hobby and high school students pick up the guitar as a school-sponsored club activity. There are even websites dedicated to finding people to make a band. Another reason the electric guitar is sought after is because unplugged it does not produce enough sound to disturb the neighbors. Ochanomizu is a reflection of this guitar popularity trend, as a majority of shops specialize in the electric six-string instrument and you can find one for any budget, from starter 10,000 Yen to pro 1,000,000 Yen. 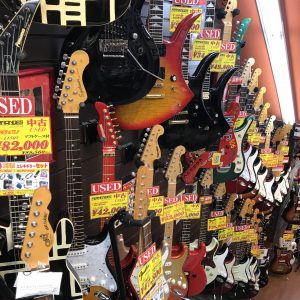 Surprising to note that Japan is home to quite a few guitar companies and even popular American guitar manufacturer Fender has had a factory in Japan. With all these national and international companies vying for Japanese musicians’ interest no company has a bigger physical presence in Ochanomizu than Japan-based manufacturer ESP. ESP’s corporate office is only a few blocks away from Ochanomizu Station and they also have two shops selling every make and model the company produces. ESP’s main store is the biggest shop on the street with over three floors stocked to capacity with carrying cases, electronics and, of course, guitars. The secondary store, located off of the main strip, is for more for rare guitars as well as parts and supplies. If you are someone living in Japan who is interested making, modifying, and repairing guitars you can enroll in ESP’s one-day-a-week yearlong guitar building class (Saturday or Sunday) that is held in Ochanomizu.

Once you are done seeing all the interesting and quirky things Ochanomizu has to offer: the giant tuba, the QR-code like guitar, and the Hello Kitty ukulele, continue walking down hill and away from the station. As you get further away from the instrument shops you will notice that the number of restaurants increase.  Ochanomizu is not only home to the world’s largest collection of musical instruments but also Meiji University and Nihon University so there are many small restaurants that are easy on the wallet. Shops like Burger King, Starbucks, and various others cater to students, musicians, and tourists looks to save a few yen.

As a tourist, if you are looking to purchase an instrument you might be able to buy it tax-exempt. The first thing to look for is the tax-free sign. If you can find it show the store clerk your tourist visa, the sign, and what you want; if it is tax-exempt you will not need to pay the 8% consumption tax. That money saved could go to buying a hard case to protect your new acquisition on the flight home. 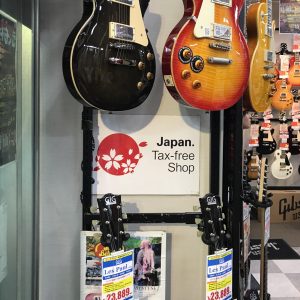 Even if you are not interested in music, exploring Ochanomizu is a great way to spend an afternoon in Japan. The sight of thousands and thousands of items gathered in such a small area alone is incredible. Some guitars displayed are like artists’ canvases with eye-popping designs and surprisingly real relics.

If you get hungry take a small walk and you will find yourself with various options. Who knows, you might find yourself in a café eating next to a foreign musician who’s going to perform on one of the world’s biggest stages, Japan’s Budokan.

10 Things to Consider When Changing JobsNext