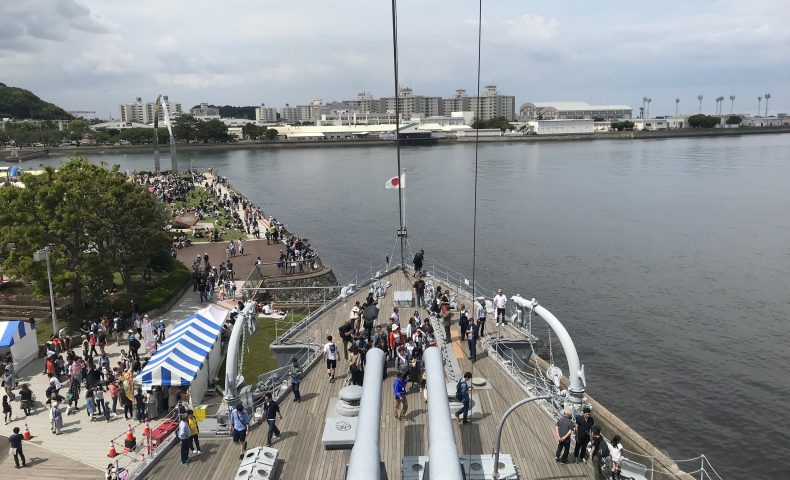 There are many interesting places in Japan. I say it so much I sound like a broken record. I don’t own a turntable and I don’t know how they break… but it’s a saying. Japan has a very rich history and Japanese people do an amazing job keeping their oldest, biggest historical assets well preserved. But what about the fairly recent history?

Yokosuka is one of those places. It doesn’t really come to mind when thinking about “interesting historical places.” One of those reasons is that while it is rich in history it lacks the vibrant colors of normal tourist destinations. While there are not gold plated temples or massive Torii gates, there are museums, parks, and monuments dedicated to Japan’s rapid modernization of the 19th century.

When I was in school (America) there was a chapter in our history books devoted to Admiral Perry “opening Japan to the world.” Here’s the brief version:

Japan openly traded with European countries in the 1500s (see my posts on chocolate and fried foods). Fearing outside influences might cause a revolution, the Tokugawa shogunate imposed isolation. While the European nations tried diplomatic negotiations, the United States took the strong-arm route to reopen the country: in 1853 they sent four steam-powered warships and threatened to attack. Thus the US ended 200 years of Japanese isolationism… And the place where Admiral Perry docked? Yokosuka City.

Perry’s arrival set off a chain reaction of modernization in Japan. To make sure this strong-arm tactic never works again the first thing modernized was the Japanese Naval force. Within a few months of Americans stepping foot in Japan the Emperor gave permission to start building large-scale war ships in Yokosuka. This led to the development of steel mills and factories but Japan still lacked the knowledge to make steam-powered steel warships.

Japan struck an agreement with France: France will teach the Japanese shipbuilding if they build several ships for the French to use in their concession in Shanghai. France assigned naval engineer Francois Leonce Verny to take charge of Japan’s steel procurement and ship production. Verny spent ten years (1866-1876) in Japan making sure that the Japanese could manage each step of shipbuilding before he returned home to France.

Yokosuka continued to play an important role for the manufacturing and docking of warships. At the end of World War II America claimed several ports in Japan as military bases for American soldiers, one of which was Yokosuka. Today the Japan Self-Defense Forces and the United States Armed Forces share the Yokosuka port. 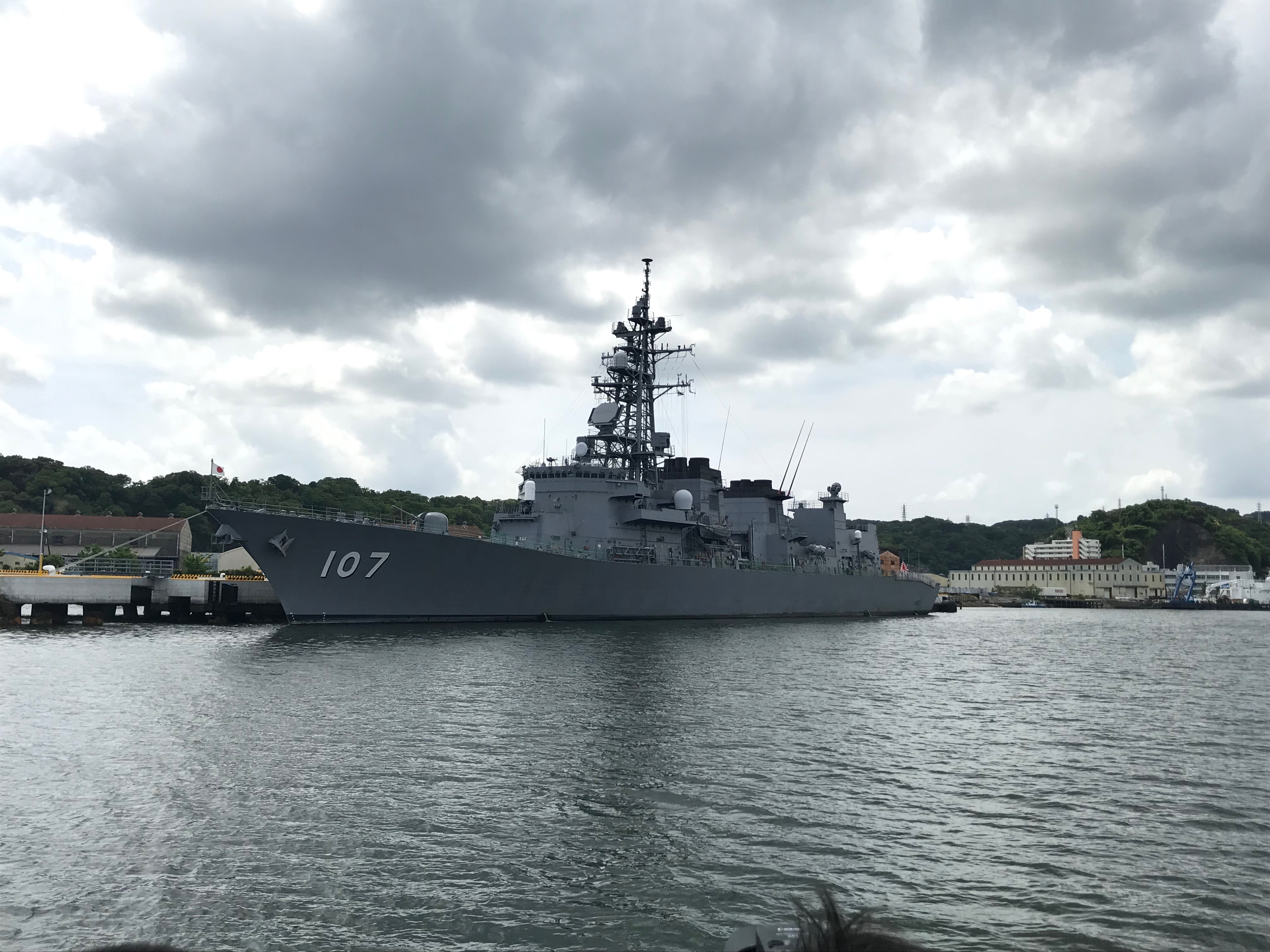 First and foremost I am an engineer. I like seeing man-made monolithic masterpieces.When I learned that I could take a boat tour and see destroyers and aircraft carriers, I signed up for the tour that weekend. Yokosuka Naval Boat Tour (YOKOSUKA軍港めぐり) is a water tour that goes around both the naval bases. The tour guide gives a description of each ship docked and explains what roles those ships play in the navy.

The tour is only in Japanese but that really doesn’t matter if you are too busy trying to get the perfect picture! I was snapping pictures so often that I didn’t realize the 45-minute ride was done until we arrived back at the docks. It was only after the tour that I looked up each ship’s name and purpose via the numbers painted on the bows.

If you are someone who gets seasick easily you can enjoy the view on land. Verny Park (ヴェルニー公園) looks out on the Japanese ships and submarines. Verny Park is also known for roses: there are over 2000 roses planted throughout the park, grouped by type and country of origin. At the northern-most part of the park is a one-room interactive museum dedicated to Francois Leonce Verny and the shipbuilding process he brought to Japan. 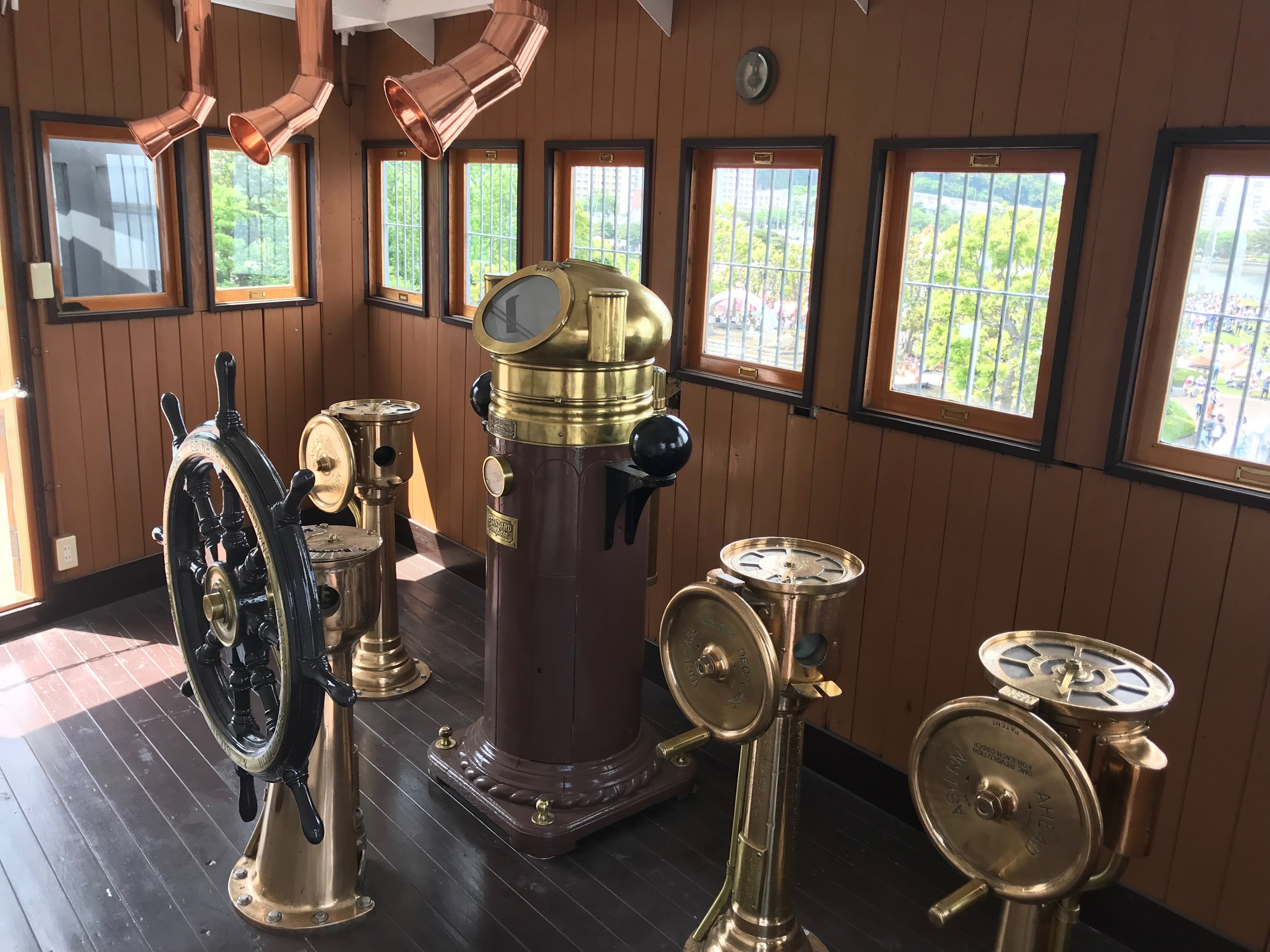 After seeing the warships from afar I really wanted to go onboard one. Unfortunately my civilian clearance level won’t even get me onto any of the bases. Thankfully there is a warship that was turned into a museum only one train station away from Verny Park.

Mikasa Historic Memorial Warship (記念艦 三笠) is a warship that served as a Japanese flagship through the Russo-Japanese War and World War I. Mikasa was decommissioned in the 1920s and designated as a memorial to Japanese naval warfare leading up to World War II. As a memorial warship, its hull was encased in concrete and much of the machines that kept the ship running have been replaced with plaques, glass cases, and intractable dioramas.

All of the items on display and interactive demos come with descriptions in both Japanese and English. The best part of the experience was seeing the enormous cannons that adorn the deck. Standing below them I could feel my internal organs shake as I imagined the recoil the boat would experience when the twin barrels fired.

To finish off the experience I had to try the local eats. That happens to be curry, specifically navy curry (海軍カレー). Apparently curry is part of the rations troops receive to fill their stomachs on their sea voyages. Honestly… it tasted the same as any other Japanese curry. Next time I go I’ll try the Yokosuka burgers, but I have a pretty high level of expectations when it comes to hamburgers.

Overall Yokosuka was a great day trip. It is one of those places where, when the weather is just right, you can feel the ocean breeze and smell the salty seas. The history was great and walking on a warship is something I don’t think I’ll ever forget. This engineer likes big toys! 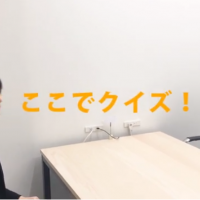 Reasons behind the increase of Vietnamese working in JapanNext 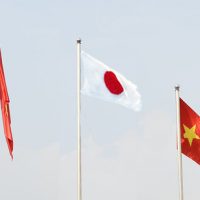