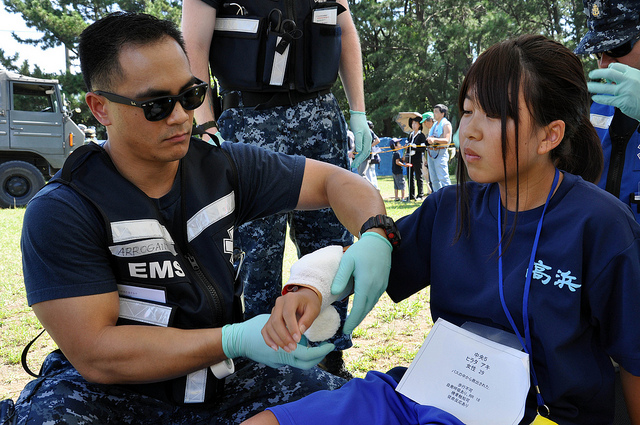 As most people are aware, Japan is one of the most seismically active places on the planet, experiencing regular – though typically weak – tremors, and the occasional volcanic eruption. Japan is also one of the most disaster-prepared nations, so foreign workers have little need for concern if they follow their companies’ evacuation procedures.

People back in UK have often asked me that question. They looked disappointed when I told them that most tremors are barely perceptible, lasting no more than a couple of seconds; that over time, one learns to filter them out of one’s senses altogether. So I’d point them towards You Tube, which has numerous videos of big quakes in action, but that never seems to satisfy their curiosity either. Then I get it; it’s how an earthquake ‘feels’ in a subjective sense that they’re trying to understand.

Close your eyes, I tell them, and imagine you’re on a fairground Cake Walk, like the one at Nottingham’s Goose Fair (Americans may know this as the Brooklyn Cake-Walk). Now imagine it’s no longer a narrow platform with handrails, but a wide open space the size of the typical office, with nothing for you to safely cling to. In fact, imagine the space is full of desks and computers, filing cabinets, book cases – all of which are moving around and could topple and cause you harm. Now count off 60 seconds in your head and you can probably imagine it’d be the longest minute of your life (an arbitrary figure, considering the 2011 quake lasted 6 minutes).

That’s how a magnitude 7 quake might feel on the ground floor, but you can dial the rocking up a notch for each subsequent floor. Yes, it can be terrifying, but worse still is the worry for loved ones – friends, spouses, kids – who are way across town; how are they dealing with it? Are they safe?

Okay, you might think me guilty of a little hyperbole there, but the Earthquake Research Institute at Tokyo University has been warning that a magnitude 7 or greater earthquake is imminent for a few years now, while the Tokyo Metropolitan Government says there’s a 70% chance of a major quake hitting Tokyo in the next 30 years. There are even those who suggest that a super-quake of between magnitude 8-10 is possible. Gulp!

So why build the nations commercial and political hub on such dodgy ground? Well, one reason is the false sense of security that pervaded Japan in the post-war period. After the horrors of the Second World War, the Great Kanto Quake of 1923 became a distant memory as Japan emerged as an industrial and economic super power. But earthquakes are essentially cyclic in nature, so Japan’s rebirth just happened to coincide with a period of relatively low seismic activity.

The wake up call came on Jan. 17, 1995 when a 6.9M quake hit Kobe. The main quake lasted just 20 seconds, collapsing buildings, destroying infrastructure and eventually killing over six thousand people. The city was physically unprepared for such an event, and initial relief efforts were poorly coordinated. But it was a turning point as far as disaster preparedness was concerned in Japan as a whole, so I think it is fair to say that one’s chances of surviving a similar quake today are much better.

The unexpectedly powerful Tohoku quake of 2011, which so terrified me some 300km away in Tokyo, underlined how effective early warning and evacuation procedures could be, but also how ineffective tsunami walls had proven. If the existing walls at that time had been just 5m higher, many of the 15,000 people who drowned or were carried out to sea would be alive today, and the Fukushima nuclear plant wouldn’t have become an environmental disaster.

Japan has learned from these calamities; buildings and infrastructure are designed to be far more resilient, coastal barriers more substantial, and relief efforts better coordinated. Public awareness too is much better, with regular drills across the country to teach people how to stay alive when a major quake occurs.

The keys to surviving an earthquake are preparedness and vigilance, and with this in mind, the Tokyo Metropolitan Government has produced a series of useful pdf survival guides in English, available here:

However, such guides are aimed primarily at families and the home, not the working environment where the situation may be quite different from company to company, building to building. But here are a few things you should do in order to react appropriately when disaster strikes.

There are also English broadcasts you can  program into a pocket radio radio, such as Inter FM (76.1FM Tokyo, 76.5FM Yokohama), Eagle (810AM) and NHK’s bilingual service (693AM).

Earthquakes are a fact of life for the Japanese and long term foreign residents, so although the subject of surviving them may seem rather terrifying, nobody here actually spends very much time worrying about them. As I said, it’s all about preparation and vigilance; thus armed, you can survive just about anything life can throw at you. And if you don’t… well, nobody lives forever!

10 Things to Consider When Changing JobsPrev

Staying Cool in the Summer: Go to the MoviesNext