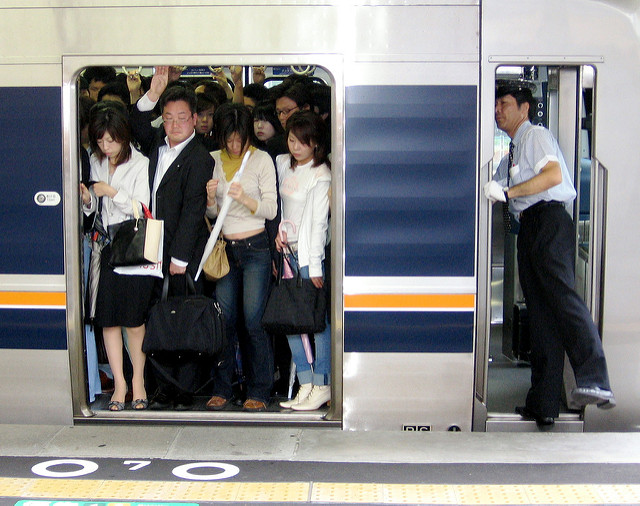 The Good, The Bad and The Ugly – Commuting In Japan

I’ve spent a good portion of my working life commuting; it was what one did – working in London – if you wanted to make your home in one of those leafy satellite towns where concrete was a foreign concept. You caught the train every morning, briefcase and Guardian in hand, with others like you on the professional, middle-class treadmill. Or you car pooled with Jack from accounting, and the mysterious Trevor, who worked (he claimed) at Thames House. Happy days!

But when I came to Japan – over 25 years ago now – my whole concept of commuting was turned on its head and the speed dial on the professional treadmill turned all the way up to 11.

Excluding delivery drivers, I can’t remember ever meeting anyone who drives to work in Tokyo; there’d be no point, the roads being so jammed up with delivery vans. And forget about the buses too; they only seem to cater for elderly ladies on their way to hospital appointments, or those sad souls who dwell in the void, too far from even a local line station.

No, it’s the rail network that keeps Japan’s workforce on the move and – thanks to its much vaunted efficiency – gets it where it needs to be bang on time… as a rule. Did I say efficiency? Honestly, that’s an understatement. Even now, I find it mind-bending how they manage to keep the system working as well as it does. Not only that, but the trains are spotlessly clean, with stations signposted or announced in English, and ever-courteous and helpful railway staff always on hand. It’s also the norm here for your employer to pay your travelling expenses to and from work.

Of course, everyone knows about the sleek and speedy Shinkansen bullet trains that connect Japan’s cities and regions, but few foreigners coming to Japan for the first time are prepared for the plethora of railways operating here. Tokyo alone is serviced by some 158 surface and subway lines provided by 48 operators who shift an astonishing average of 20 million folk a day. Wow!

This daily mass migration to the corporate offices, retail outlets, service industry, schools and colleges in the metropolitan area comes largely from outlying towns and prefectures where rents and property prices are much much lower. There are entirely redeveloped towns on the fringes of Tokyo (known as “bed towns”) where all one sees are sprawling high-rise flats complexes served by obligatory shopping malls and railway stations.

Thus, for anyone coming to work in Japan, it will be where you can afford to live that determines your journey time. I used to know man who worked for a famous financial institution in Tokyo. He could get from his enormous, company-provided apartment in fashionable Roppongi to his office in under 30 minutes. Meanwhile, the 45km commute from my ‘shoe box’ in the sticks to my office took anything up to 2 hours, including the walk to the station.

If you don’t get any support with accommodation from an employer, choose where you live carefully. Consider the most convenient station from your company’s office, as well as the nearest change over stations – this will give you an idea of what lines come into that part of the city. Then it’s simply a matter of choosing a location up-line that may suit your budget for rent, and how long you’re prepared to spend in transit every day. It’s also the case that rents get lower the further one lives from a station, so if you don’t mind a walk, or have a bicycle, you can save a lot of money.

Commuting from green and pleasant Hertfordshire to central London, as I used to, was never monotonous for me. There was a meditative quality to staring out of the window as the train passed through areas of green pasture, grazing cows and quaint railway cottages, then on into the grimy, yet vibrant reality of the city. All it needed was a Ringo Starr voice-over and it would have been like riding Thomas the Tank Engine. Okay, so maybe that’s an exaggeration, but you know what I mean.

Sadly, there’s very little to get excited about commuting into Tokyo. Everything looks the same, every one horse bed town blends seamlessly into the next, town after town, from one prefecture to the next, as though the city never ends. Japanese commuters have a way of dealing with this monotony; it’s known as sleeping. A commuter carriage is not complete without at least a dozen people dozing in their seats!

Well, so much for the good – what about the bad? There are tons of references on the internet to the horror of Tokyo’s rush hour trains; and they’re mostly true. That’s the nature of a migration – everybody’s doing it. Try to imagine those 20 million commuters all crammed into a carriage made for 5 million and you’ll have an idea what it’s like. And with Japanese employers being absurdly opposed to the idea of flexible-time working, this rush hour madness remains a perennial fact of life for commuters.

They say you can get used to anything, especially where the alternative is poverty, so one naturally finds strategies for dealing with overcrowded trains. Besides, rush hour doesn’t last forever… or it shouldn’t do… until nature strikes and then everything stops. Heavy snowfall, torrential rain, lightning and the odd earthquake can all leave one’s train stuck in a tunnel for minutes that pass like aeons, and you sweltering in a sea of hot bodies… more sardine than human… gasping for air and barely able to refrain from losing one’s marbles altogether.

Okay, such delays are only as frequent as nature makes them and trains soon get moving again, but what always annoyed me most were the selfish b•••••ds that decide to off themselves by jumping in front of moving trains. I mean, I’m not unsympathetic… if one has decided it’s time to check out, well, I get it… but there are much less messy and disruptive ways to leave Kansas, Dorothy!

If one needs to be tough to deal with rush hour trains, some of the stations require one to be nothing less than intrepid. Stations like Tokyo, Shibuya, Shinjuku and Ikebukuro can seem like a confusing array of tunnels, entrances and exits at the best of times, but at rush hour they throng with dense crowds of criss-crossing commuters, all dashing in different directions. I ought to know them by now, but they still befuddle the life out of me – I’d rather get back on the train than face that mayhem!

Now for the ugly. Some people handle crowded trains better than others, they’re just a fact of life, and if the guy pressed up next to you hasn’t showered, or his breath is sour with stale alcohol, tobacco and garlicky gyōza from the previous night’s drinking, so what? I wasn’t always that fresh myself when coming to work from a different direction… if you get my drift. But some men use the crowd as cover for nefarious intent.

They’re known as “chikan” in Japanese, which loosely translates as “pervert”and describes any male who molests females in public places. These repellent inadequates have been an unfortunate part of the Japanese landscape for as long as I can remember. Being devious little degenerates, they’ll prey on women and girls on packed trains where groping their victims is easier and often goes unchallenged by unassertive Japanese females.

Actually, rail operators take chikan very seriously, even if the police and courts have not always been suitably sympathetic to victims. However, difficulty in identifying offenders in rush hour crowds has led many operators to provide women-only carriages, available at times determined by the operators, usually rush hour. Provision is city by city, operator by operator, so if you’re a female working in Japan, check to see what is available in your area.

Compared to the frustrations that face commuters heading into London these days, commuting in Japan is a dream, even taking into account rush hour. Yes, it has its frustrations too, but at least one can get where one needs to be on time and with a minimum of fuss. Think of it as part and parcel of the Japanese work culture, rather than simply a means of getting from A to B.

[Blog] How to Take the Best ID Photo for Your ResumePrev

Conduct A Deep Analysis Of Yourself For A Successful Career PathNext